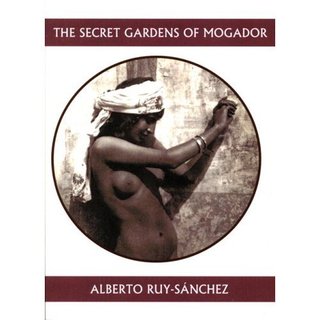 The Secret Gardens of Mogador
Translated by
Rhonda Dahl Buchanan and
published by White Pine Press. 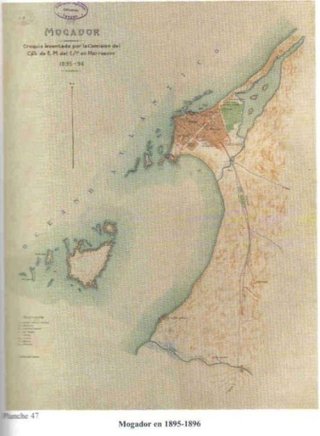 Ancient map of Mogador
The almost lake at the right does not exist any more. Neither the water chanel linking it to the south beach. 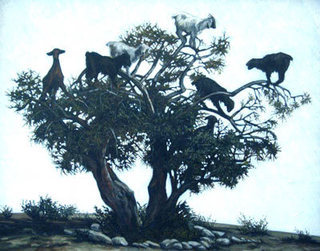 Goats on the Argan Trees of Mogador
A painting by Maria Sada. 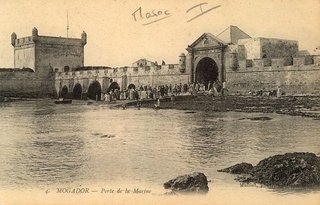 The entrace to the Port of Mogador
at low tide, at the beginning
of the XX Century 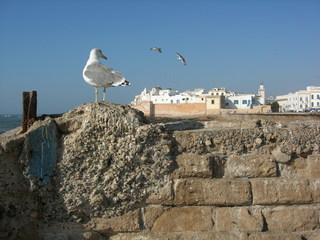 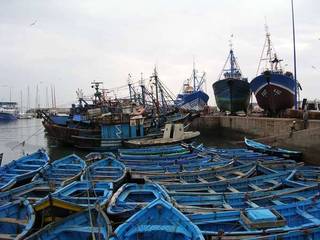 The Blue Port of Mogador 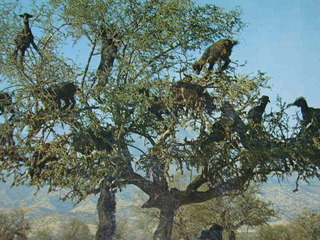 At the South of Mogador,
goats eating from the trees. 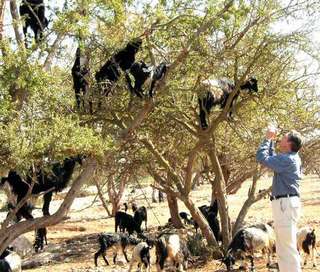 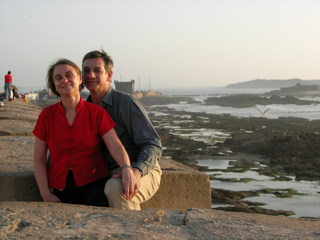 With Margarita De Orellana on the Mogador Walls

Alberto RUY-SÁNCHEZ
•
THE NINE GIFTS
THAT MOROCCO
GAVE ME

For more than twenty years I have been writing a cycle of novels, poems and short stories that take place in Mogador, a walled Moroccan port on the Atlantic coast, two hours and a half from Marrakech. Since 1953, its official name has been Essaouira, but people still continue to call it Mogador. Considered one of the entrances to the Sahara desert, it was like an "almost island" between two oceans, one a sea of sand.
For many, Mogador was like another continent almost out of Africa. A very unique city where a Jewish baby and a Muslim baby could be nourished by the milk of the same wet nurse. A place where different black Africans from south of the Sahara and at least two white African groups, the Berbers and the Arabs, mixed creating an "animistic-islamic" ritual culture known as the Gnawa. Today Gnawa music is one of the deepest cultural traditions in Mogador, and there is also an interesting movement of naif Gnawa painting. Mogador is a town where talented artisans, specializing in woodcarving and silver jewelry, create masterworks of wonder. Until the middle of the nineteenth century, Mogador was a bustling international commerce port, which linked south and north Africa with Europe, and harbored a small but dynamic European community that conducted commerce with diplomacy. Mogador was an impregnable walled port, designed by a French military architect inspired by the walls of Saint Malo, but at the same time, it remained a fragile city possessed by fierce winds and surrounded by dunes that threatened its existence each afternoon.

Many readers of my books have considered Mogador an imaginary city, and it is in fact imaginary, but only as it is reconstructed by words, like any city that we describe. And that happens as much in fiction books as in the so equivocally called non-fiction, and it happens with any city, including the one we inhabit at the moment we create its portrait. We can be extremely faithful to the spirit of a city even while fictionalizing it. Or we can be absolutely faithful to its physical aspect. But in both cases it is always a reconstruction through literary images. Any written place is or becomes imaginary.
I am proud of seeing Mogador included in The dictionary of Imaginary places, by Alberto Manguel.(6) As much as I am proud of seeing moroccan critics consider my books faithful to their culture and their places.(7)
Several journalists in Mexico asked why I mention in the same novel (On the Lips of Water) a real place like Sonora and an imaginary one called Mogador. But in Morrocco they asked me why I incorporate in the same novel a real place like Mogador-Essaouira and an imaginary one, Sonora. We easily believe that what we do not know is imagined by someone. But it is a greater mistake to believe that any writen description of what we do know and is closer to us, is a real portrait, or non-fiction.
To believe blindly in the declared virtues of so-called non-fiction writing supposes a fetishism that annuls the distance between a thing and its representation. It is like worshipping the painted portrait of a god as if it were the god itself. The origin of that fetishism of the written word is in the religious culture that believes in the Bible as the ultimate truth. The difference between Fiction and Non-fiction books is a fabrication of the culture described by Max Weber in his book The Protestant Ethics and the Spirit of Capitalism. And it is the same spirit, and the same ethics that produced the modern idea of our identity as the product of what is popularly called "our true roots." The idea of revealed truth is a twin idea of the belief in one culture and race being superior to the others. Discrimination is a fact in the world. But asking for a quota of everything for each "minority" is a confirmation of those same values reducing what we are to one dimension of life.
This brings us back to the question of who we "truly" are? The answer is not as simple as some religions, nations, or racial groups would like us to believe. Many times it is a reductionist question supposing that we are something strictly reduced to our origin, religion, social class, race or other restricted affiliation. But life gives us surprises. Sometimes we are lucky enough to discover, some where else, new dimensions of the others and of ourselves. I believe, with Amin Maalouf (8), that "Identity is not given once and for all: it is built up and changes throughout a persons life time"(p23), and that "Every individual should be able to identify, at least to some degree, both with the country he lives in and with our present day world. This involves the adoption of certain habits and types of behaviour, not only by the individual himself, but also by the people around him, whether groups or individuals. Each of us should be encouraged to accept his own diversity, to see his identity as the sum of all his various affiliations, instead of as only one of them raised to the status of the most important, made into an instrument of exclusion and sometimes a weapon of war" (p.159).
We are also what we are becoming, what we emphasize in our lives, and I am becoming a southern lover of Mogador, of North Africa, of its people and places. A Mexican writer becoming a bridge of sand (words are as fragile as grains of sand), between the Sonora desert and the Sahara. I claim for myself and others the right to be a citizen of all the places of my choice, the places that chance offers me to know and love. And, sometimes, to be loved. I claim the right to pay less attention to the roots and much more to the flowers.

In our modern rational and functional vertigo we do not give Chance the place it deserves. But it is by chance that many of the most important things in our lives happens. By chance we meet the person we will live with. I met my wife in the line to register at the university. And with her, many years ago, I also had the chance to discover Morocco. I had the chance to receive from Morocco some gifts that were unique and gave sense to my work and my life:


my email id is snigdhendub@gmail.com. can I have you email id?

Hi, this is Snigdhendu Bhattacharya, a writer and journalist based in Kolkata. As it has been finalised now that you are coming here to inaugurate the 34th book fair this January, can I have a few words with you before you arrive in the city?

I read "Los nombres del aire" and "En los labios del agua" and am thinking of translating them into Vietnamese, my native tongue, of course with proper copyright being settled. I'm happy that the world still produce writers like you, so pure, so tender! Wish you health and happiness. May every luck and blessing be given to you. Cao Dang Tran Tien, Hanoi, Vietnam