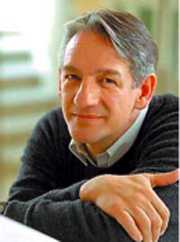 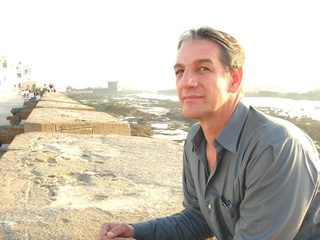 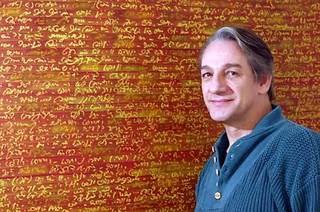 in front of a painting by Bia Wouk 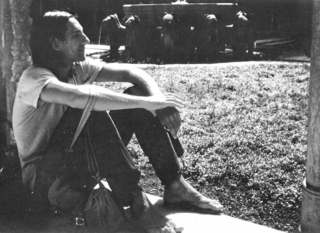 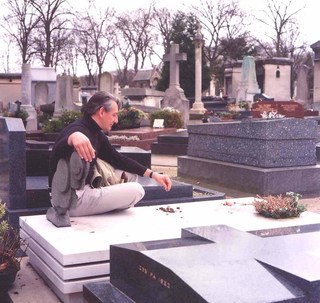 Alberto Ruy Sánchez (1951) is a fiction and non fiction writer, poet and essayist from Mexico City. He received his Ph.D. in 1980 from the University of Paris under the directorship of Roland Barthes.
His novels include: Los nombres del aire (1987, Premio Xavier Villaurrutia), Los demonios de la lengua (1987), En los labios del agua (1996, recipient of the Prix des Trois Continents for its French translation by Gabriel Iaculli); and Los jardines secretos de Mogador: Voces de tierra (2001, Premio Cálamo la Otra Mirada). His most recent publications include, Limulus. Visiones del fósil viviente/Visions of the Living Fossil (2004, co-authored with the artist Brian Nissen and translated by Rhonda Dahl Buchanan) and Nueve veces el asombro (2005). He has published widely in scholarly journals and is the author of several books of literary criticism, including Una introducción a Octavio Paz (1990, recipient of the Premio José Fuentes Mares). Since 1988 he has served as the editor-in-chief of Artes de México, which has won more than one hundred national and international editorial awards. In 2000 he was proclaimed Officier de l’Ordre des Arts et des Lettres by the French government, and in 2005 he received the honor of Gran Orden de Honor Nacional al Mérito Autoral in Mexico City. He is also an Honorary Citizen of Louisville, Kentucky, an Honorable Kentucky Colonel, and an Honorary Captain of the majestic steamship, the Belle of Louisville. In addition, he has served as a Visiting Tinker Scholar at Stanford University and as the Chairman of Creative Non-Fiction Program at the Banff Centre for the Arts. Visit www.albertoruysanchez.com for more information about the author and his works. 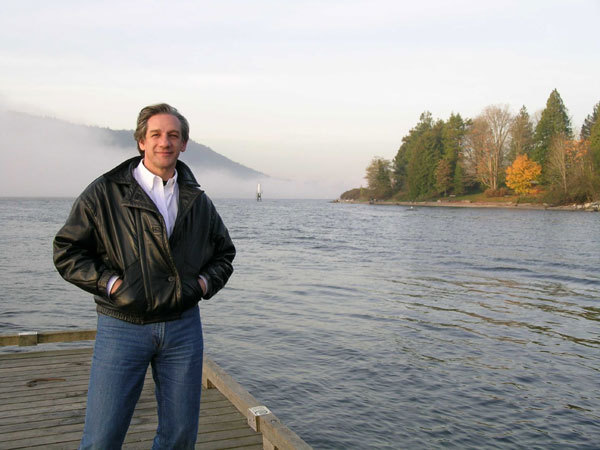 Alberto RUY-SANCHEZ in Dollarton, Vancouver, where Malcom Lowry wrote Under the Volcano