"Ruy-Sanchez's works of fiction are always amazing: adventure, poetry and intelligence in a new geometry of words... And he is also one of our best essayistes. His writing has nerve and agility, his intelligence is sharp without being cruel, his mood is sympathetic without complaisance or complicity."
Octavio Paz

"Beautiful and disturbing..., in his books a man slowly explores a woman's universe of mistery and poetry."
Raphaelle Rérolle, Le Monde

"To better place this narrative all made of transparency and sensuality it is necessary to mention The Daughters of Fire by Gerard de Nerval..."
Claude Michel Cluny, Le Figaro Litteraire

"To name the air is to make it visible. Alberto Ruy-Sánchez invented not only novels but a new way of reading, the way of poetic lightning stroke."
Severo Sarduy

"From the Sonora desert to the Sahara, from the french Guyana to the urban jungle of Paris or Mexico City, desire travels in Alberto Ruy-Sánchez's books at the speed of dream."
Fatima Zohra Larbi, Le matin du Sahara

Browse an Anthology of his Texts, in Spanish

Alberto Ruy-Sánchez, 1951, is a fiction and non fiction writer, poet and essayist from Mexico City. He received his Ph.D. in 1980 from the University of Paris under the directorship of Roland Barthes. His novels offer an exploration of the many facets of desire, and nearly all his works of fiction take place in Mogador, ancient name for the Arabic city of Essaouira on the Atlantic coast of Morocco, a walled labyrinth of winding streets, marketplaces, bathhouses, and hidden gardens. His novels include: Los nombres del aire (1987, Premio Xavier Villaurrutia), Los demonios de la lengua (1987), En los labios del agua (1996, recipient of the Prix des Trois Continents for its French translation by Gabriel Iaculli), Los jardines secretos de Mogador: Voces de tierra (2001, Premio Cálamo la Otra Mirada), and La mano del fuego (2007).
Other recent publications include: Limulus. Visiones del fósil viviente/Visions of the Living Fossil (2004, an album co-authored with the artist Brian Nissen and translated by Rhonda Dahl Buchanan) and Nueve veces el asombro (2005, English translation by Rhonda Dahl Buchanan, forthcoming by White Pine Press). His fiction has been translated to many languages and he spends much of his time traveling around the world as an invited lecturer and storyteller. He has published widely in scholarly journals and is the author of several books of literary criticism, including Una introducción a Octavio Paz (1990, recipient of the Premio José Fuentes Mares). Since 1988, he has served as the editor-in-chief of Artes de México, which has won more than one hundred and fifty national and international editorial awards. In 2000 he was named Officier de l’Ordre des Arts et des Lettres by the French government, and in 2005 he received the honor of Gran Orden de Honor Nacional al Mérito Autoral in Mexico City. He is also an Honorary Citizen of Louisville, Kentucky, an Honorable Kentucky Colonel, and an Honorary Captain of the majestic steamship, the Belle of Louisville. In addition, he has served as a Visiting Tinker Scholar at Stanford University and as the Chairman of Creative Non-Fiction Program at the Banff Centre for the Arts and is a Guggenheim Fellow.
Visit http://www.albertoruysanchez.com for more information about the author and his works. 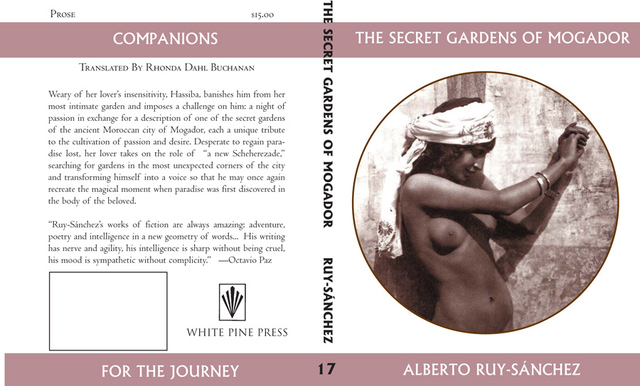 Translated by Rhonda Dahl Buchanan. Published by WHITE PINE PRESS. oct 2008. Get it on line. 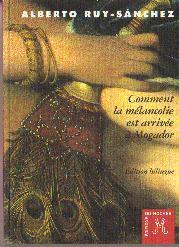