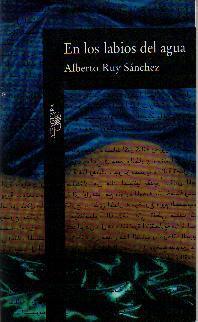 "Like the "halaiqui," the ritual storyteller of Mogador who transports his listeners to other worlds, Alberto Ruy-Sanchez invites his reader to accompany the protagonist of "En los labios del agua" on his journey to search for the ancient manuscripts of the Arabic calligrapher Aziz Al Gazali, founder of the "Sonambulos," a caste of men and women for whom desire is the compass which determines their destiny. While the quest for desire is embodied in a feminine protagonist in the author's first novel, "Los nombres del aire," (tranlated as Mogador) in his second novel, the infinite forms of desire, longing, and love are explored by a male protagonist whose name, Juan Amado, reveals his fundamental obsession. The reader who accepts the author's invitation to penetrate the labyrinth of this novel, which is constructed with manuscripts, letters, notebooks, poems, calligraphy, dreams, and memories, should abandon conventional narrative expectations, and prepare to linger over the poetic prose which spills onto the page like the water of a fountain.

In its simpliest form the novel is a long love letter written by Juan Amado to Maimuna, the woman at the center of his quest for desire. A whirlwind of erotic possessions carries the protagonist to many lands throughout the world, and finally to the Morrocan city of Mogador, where Aziz Al Gazali wrote his treatises on love so many years ago. As the reader puts together the fragments of this mosaic of desire, the image which emerges is a portrait of the narrator, a Mexican writer who traces his origins from the desert of Sonora to the sands of the Sahrara, and discovers in the Arabic world the seeds of his own roots and those of his ancestors. As he writes the story of his search for a lost paradise, Juan Amado discovers, as does the reader, that words evoked by desire have the power to cross oceans and deserts, erasing distance and time in their effort to reach the beloved. For those readers who enjoyed "Los nombres del aire," the author's second novel offers another opportunity to experience pleasure in Alberto Ruy-Sanchez's imaginary city of desire."